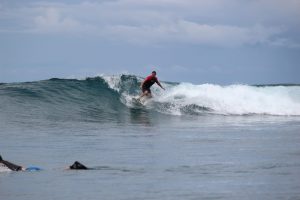 There’s just something incredibly exciting about jumping on board what will be your home for the next 10 days, meeting the local crew and cracking a can of Bintang while you share the anticipation with your mates of what you might wake up to when the boat anchors in the morning about 90 miles off the coast of Northern Indonesia. Shortly after boarding, we introduced ourselves to an American guy and he nervously responded ‘I’m not going to be happy if someone steals my meds’. ‘Don’t worry mate, nobody will steal your meds’ was the quick reassuring reply. Sam (not his real name), we soon found, had a significant mental illness and had remarkably somehow found his way onto a surf charter trip to a remote island chain on the other side of the world. Luckily for Sam and the owner of the boat, we had an experienced mental health Nurse called Steve onboard. Owners of Indonesian Surf Charters face very extreme penalties if they lose crew and this was one very real possibility that we know the owner contemplated very early on in the trip. For the next 10 days, Steve nursed Sam and coached the owner on how to support him. The rest of us took Steve’s lead and made Sam feel as comfortable as possible. Sam had some moments where he wasn’t coping at all and we can only imagine what could have happened if Steve wasn’t on that boat. It would have been very different. One of the highlights of any surf charter is sitting atop the deck in the late afternoon, watching the sunset and being completely surfed out while you reflect on the days waves over beers with some of your oldest and best mates and some new ones. It was on these afternoons where Steve started sharing his research and role as a child and adolescent mental health nurse and how big the problem is and only becoming worse. We were all ears. Watching how he cared for Sam and hearing him speak passionately about the ideas he had to make a difference and help other people ‘know what to do’ when someone like Sam needs support was inspiring. We returned to Australia and soon after started a not for profit and charity called EquiEnergy Youth with the aim of building capacity in communities to support the mental health and wellbeing of young people. And Steve finished his PhD and is now Dr Steve. Perhaps Sam being aboard that boat was a coincidence, but we don’t think so.

Meet Izzy the Education Support Dog at Mt View HS. Izzy’s job is to support students with complex emotional needs and to help improve their overall wellbeing and engagement. She excels at improving self regulation of student behaviour and increasing…